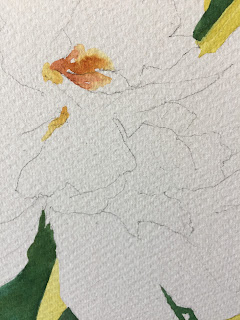 After creating a detailed sketch, I lightly erased the darkest lines so the graphite wouldn't smudge or show through in the finished painting. Then I began to add color, beginning with the center of the blossoms, using New Gamboge, Transparent Orange, and Burnt Sienna. I put down a light wash of Green Gold on the stems and the leaves.

I gradually shaded the base of the inner and outer petals, using thin washes of New Gamboge, Permanent Rose, and Cobalt Blue.

The background was glazed with Winsor Green (BS), Green Gold, and Viridian. I used a loaded brush, with just enough water to allow the colors to mingle freely on the paper. Unlike my usual practice, which is to work flat on my studio table, I set this painting up on my watercolor easel, at a 45-degree angle. 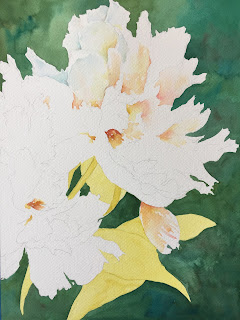 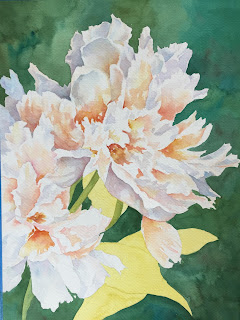 The process of building up color in the blossom required lots of drying time in between washes of pigment.

I aimed for a softly "glowing" quality in the petals.

The finished painting reveals several late-in-the- game decisions.
I knew I wanted the hearts of each blossom to be as vivid as possible, so to achieve this, I dampened those areas. Then, I dropped in a small amount of Transparent Orange and Opera, and allowed them to mingle on their own. I rarely use Opera pink, but felt it would be useful this time because of its "neon" quality. I heightened the contrast on the stems and the leaves, using glazes of Permanent Sap Green, Winsor Green (BS), and Shadow Green. I indicated shadows with a wash combining Winsor Violet and French Ultramarine.

My final decision was to darken the background of the painting. Having completed several other florals with a near-black background, I knew the stark contrast would make the flower itself "pop." To make sure it was not a "flat" black, I mingled three colors throughout -- Winsor Violet, Permanent Sap Green, and Cobalt Blue. I kept the pigment consistency very thick and creamy, just enough to spread but thick enough to prevent the original green background from taking over. That green, however, provided a good base for the final, intense dark and it's possible to see some of that green (especially Viridian) shining through.
The opal peony reminds me a lot of an opal ring I inherited from my great-great Aunt Maude. I think she would have liked this painting!