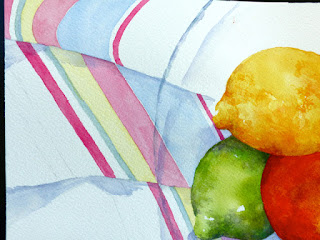 Sometimes things don't turn out as you hoped they would... In completing my painting, "Kitchen Sunshine," I ran into several problems -- one of which just about derailed the whole project. But having spent a lot of hours on the details, I was determined to offer it as a finished work, albeit with a few changes I hadn't planned on. In my previous post, Kitchen Sunshine I, the tea-towel started out with a white ground. But as I progressed, I decided to give it a pale yellow wash. Big mistake!!

This diminished the punchier impact of the warm-toned fruit. It also downplayed a strong contrast between the stripes and the white ground of the towel. At this point, I can't say what caused me to use a pale yellow wash... I just know I wouldn't do it again. 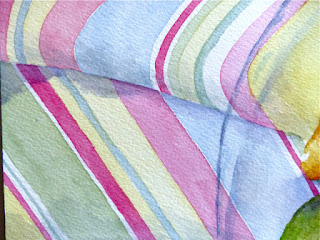 As I began to deepen the shadows and emphasize the folds in the tea-towel, I worked too quickly. Not allowing the glazes to dry in between layers meant I was heading in the direction of mud (rather than a clear glaze of one color over another). The results of my impatience are visible, in the finished painting, in lower of the two folds.

But the most frustrating thing I ran into at the very conclusion of this project was a tear in the paper! I slid my palette knife carefully (I thought...) around the edges of the watercolor block to loosen the painting from the adhesive that binds all four sides.
As I did this, the paper ripped at the bottom...

I was heartsick, given the number of hours I'd invested. But luckily the tear was just an inch long, and extended only about 1/2" up from the bottom. The solution was obvious: make lemonade by cropping the painting. Instead of measuring 9" x 12, its dimensions are 8.5" x 11.5" and it is available for purchase at my Daily Paintworks gallery. Click on the link accompanying the caption to go to the gallery. 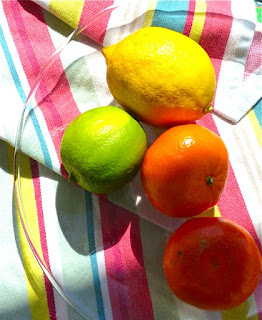 At this time of year we usually have plenty of clementines on the kitchen counter, along with a few lemons and limes.  I wasn't sure I wanted to use a striped tea-towel under the glass plate, but I do like the colorful statement it makes -- plus, it's a nice challenge. ( I first used this tea-towel in my painting "Considering the Primaries." )

Although I erased the pencil lines of the original sketch, before I took the photo below, you can see the direction I'm going in. My paper is a 9" x 12" block of Arches cold press 140#. 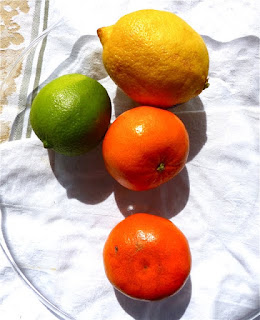 My palette includes the following colors: 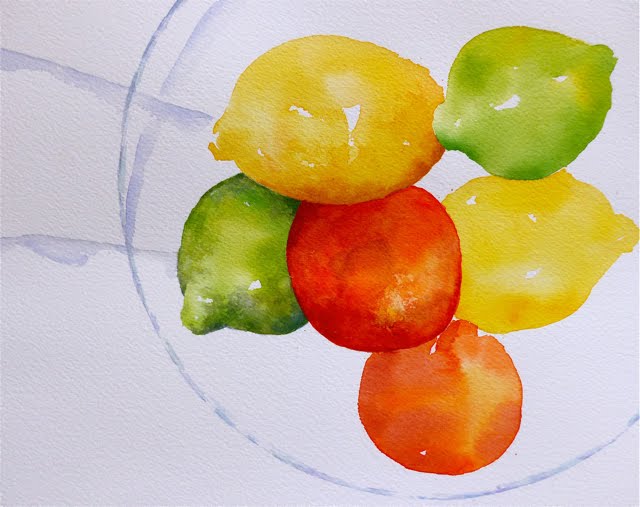 I've been a fan of historical novels for decades, and the Outlander series by Diana Gabaldon is among my current favorites. I've vacationed in Scotland three times and, having taken walking tours in the Orkneys and in the western Highlands, I feel (marginally) qualified to paint some of these areas from memory.
Fans of "Downton Abbey" may remember Inveraray Castle, in Argyll, which was featured as cousin Rose's home. Inveraray is situated along Loch Fyne, and is about as picturesque as it gets for subjects like this. However, a close second is Eilean Donan -- a 13th century pile also located in the western reaches of Scotland, somewhat north of Inveraray Castle.
My painting, "Highland Fortress," is based loosely on images of Eilean Donan, although I've taken artistic license with location and some of the details. My goal was to capture the romantic ambiance of this beautiful, but rugged, area of Scotland, and to indulge my love for this region.
I began with a simple pencil outline of the basics -- the castle, the lines of the mountains in the background, and the waterline.  After wetting the sky area, I loaded a 1" flat brush with Cobalt blue, saving some whites for the clouds.While the paper was still damp, I dropped in a bit of diluted Winsor Blue (GS) to give some variation to the color of the sky.

I let the paper dry completely before moving to the next step -- adding rough brushstrokes (using a 1/4" flat brush) to represent the land and some foliage.
Adding the mountains, and then blocking in the shapes of the castle, and the long stone causeway that connects the castle island to the mainland, were the next steps.

I layered a dark green over a lighter, green-gold, to indicate a forest-covered mountainous area on the far right. Using a green-gold underpainting in this way helped suggest the sunlight filtering down into the craggy, shadowy areas of the loch.
Shadows further defined the structure of the castle and the causeway. I built up the foliage in the foreground using a dry brush (again, my 1/4" flat) loaded, alternately, with full-strength pigments: shadow green, ultramarine blue, sepia, and burnt sienna.

Dampening the entire area at the bottom of the painting prepared the surface of the paper so I could paint the loch in the foreground. I let the paper dry a bit after wetting it so the pigment wouldn't disperse too completely. It can be a challenge, when working on a damp surface, to add the right amount of color to define the reflections, yet to preserve the transparency of the water. I used a 3/4" flat brush to paint the loch.
After assessing the impact (or lack of it!) the the focal point (castle and causeway in the middle ground) I continued to deepen the shadows of both. My goal at this point was to bring those structures forward, to heighten the sense of depth in the scene. I also added more color to the reflections, and to the mountains, as can be seen in the final version (below).

Pay attention to the "fade factor..."
On paper, watercolors appear about 30% darker when they are wet. After a painting dries, everything is lighter. So if you want bold, rich colors you have to pile on the pigment.
Practice. Experiment. Use up a lot of paper and paint. Eventually you figure it out........