I have a large collection of family photographs, some dating as far back as the 1870s. All of them are black-and-white, although a few are the brown-tone common to early tintypes. Many of the people in these photos are my mother's paternal grandfather and his siblings -- farmers who emigrated from England and settled in Canada. Later, when they arrived in Vermont's Northeast Kingdom in the years just before World War One, they lived and worked as farm managers. As a result, my maternal grandfather Fred, his sister Thelma, and their cousins, spent their early childhood in relaxed and healthy rural surroundings.

My Aunt Thelma was quite photogenic. And despite the grainy, out-of-focus snapshots produced by early 20th-century cameras, images of Thelma are captivating. For quite some time, I've wanted to translate these photos into watercolor sketches. So I recently began to work on two paintings of my great aunt when she was a young girl.
One reference photo shows her smiling and proudly wearing what appears to have been a new dress. The other photo is Thelma standing next to a well-groomed, friendly looking collie dog. (I believe this dog belonged to the owner of the farm where my great-grandparents worked, because Thelma and her brother Fred had a scrappy black-and-white terrier named Dixie.)
For each of these paintings, I knew I'd need to plan the colors carefully.  I especially wanted to capture the mood of each photograph.

The picture with the dog was easy, as it is clearly a summertime scene. My goal was to keep it simple and impressionistic, and only suggest the house and trees in the background, concentrating instead on the more lively details of my aunt and the dog.
The new-dress photo shows snow on the ground and on the porch, so I decided I'd avoid that cold look for a background. For this, I decided on a "dream-like" background suggesting a little girl's happiness over a new dress and matching hair-ribbon.
I blocked in the background with washes of blue, violet, burnt sienna, and burnt umber, outlining the figure to be detailed later.
For the summertime scene, with the dog, I made a graphite sketch, then painted Thelma's face, arms, and hair. I left white paper showing where her hair-ribbon will be painted  (to match her dress). I sketched in the dog's fluffy coat, and started to paint in the grass, working carefully around the dog in a way that would save her light-colored snout, ruff, and legs.
Click here to see the finished painting of Thelma and the new dress. Click here to see the finished painting of Thelma and the dog. 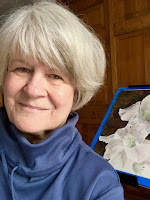 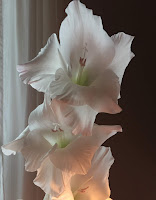 Following a long un-creative spell, I'm back in the studio. Today, I finished a 10" x 14" study of a stem of white gladiola blossoms, using this photo (left) taken several years ago as my reference.
As usual it was tempting to dwell on the details in this painting but I tried to quit while I was ahead. My goal was to try to capture the luminous quality of the blooms.
I used a limited palette for this painting; only three Winsor & Newton colors, all of them very useful for glazing:  Permanent Rose, New Gamboge, and Antwerp Blue. After doing a rough pencil outline, I completed the background so that the flower shapes would be well-defined. The background was done with thick brushfuls of pigment, small strokes at a time, letting the colors to blend on the paper. I then focused on glazing the shadows and highlights, using multiple layers thin washes which were allowed to dry completely before the next layer of glaze. I tried to leave much of the paper showing while also aiming for the depth that the shadows would provide. Unfortunately, I didn't take many photos as I was working fast. It's easy to forget that documenting the steps will make for a more interesting blog post! I'll try to do better with that next time...