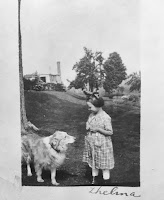 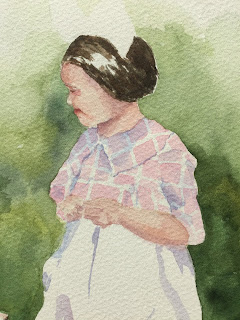 I was better at taking photos of the process with this painting! The original reference photo of my great aunt, Thelma, didn't give me much to go on in terms of color. But since it was taken in the summer, I determined that a suggestion of green hedges and lawn would the most effective background.
Initially I had considered putting a tree in on the right, with branches reaching out to the left, to frame the image -- but decided not to add any detail that would distract the eye from the two main characters. After some deliberation, I decided to paint the dress as a pink-plaid gingham (there's no way to know, from the reference photo, what color the dress was!). 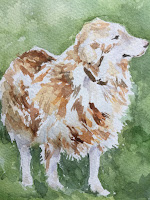 I under-painted the shadowy folds in the dress with a wash made of cobalt blue and mineral violet, let these dry, and then began adding the little pink squares.
I dampened the upper part of the painting, which I'd left white, brushed  in a pale blue wash (cobalt blue and cerulean blue). Once that was dry, I completed the background using shadow green in the darkest areas, and successive washes of permanent sap green, and a combination of green gold and Winsor Blue (GS).
I mixed a small amount of shadow green with some mineral violet to add a bit of shadow under the figures. Finally, I gave a little more color (burnt sienna and yellow ochre) to the dog's coat, using a #4 pointed round brush in quick brushstrokes.