While in Oslo last year on vacation, I took as many photos (surprise!) as I could without feeling distracted from our "in-the-moment" time in Norway. We went to Frogner Park (Frognerparken) several times, as it was only about a mile or so from where we were staying. Its location offered a nice walk through picturesque neighborhoods. Even though it was October, the weather was quite mild (usually between 55F and 60 F), so a lot of plants were still blooming. The roses were especially lovely, and today I decided to use one of these photos as a reference for a small painting.

My palette is a limited one: Permanent Rose, Cobalt Blue, Mineral Violet, and Yellow Ochre for the rose itself. And for the background: Permanent Green, French Ultramarine, Green Gold, Winsor Blue (GS), Shadow Green, and Sepia. To paint the blossom, I used my favorite #12 pointed round brush from the Robert Simmons "Expression" series, purchased from Jerry's Artarama.com. (I have three of these #12 brushes, and have just ordered two more).
I did a simple graphite sketch to begin, and then started with glazes of Permanent Rose and Mineral Violet in varying intensities. I put in the deepest tones first, and slowly added successively lighter glazes -- working from dark to light –– the reverse of how I normally do a blossom like this one. It seemed that this would be the best way to avoid a too-heavy application of color, in the shadow areas, during the final stage of the painting.
Before beginning the background,  I erased all of the pencil lines and painted free-hand around the rose, relying on the dark tones of the background to give the blossom its shape and form. I used two different brushes –– a 3/4" flat brush from the Cheap Joe's "Golden Fleece" series (CheapJoes.com), a synthetic fiber brush that holds an edge well, and a pointed round #8 from the "Da Vinci Cosmotop Spin" series (available from DickBlick.com).
I mixed a large puddle of rich color (not too much water) blending on my palette Shadow Green, Permanent Sap Green, French Ultramarine, and a small amount of Sepia. Applying this mix without  concern for coverage resulted in the effect I was looking for –– a suggestion of foliage shapes and varied tones, with a lighter patch of bluish-green in the upper left corner where there might reasonably be a patch of sky peeking through. As I worked toward the bottom of the painting, I added more Permanent Sap Green to the mix, along with some Green Gold. While the bottom section was still damp, I scrubbed in a line of Yellow Ochre for a flower stem, and made some additional lighter and darker marks on the right, again giving a suggestion of foliage without actually drawing in any leaf shapes. 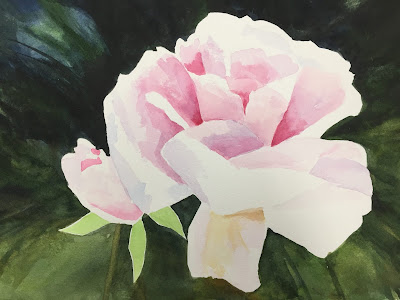 Although I wanted to finish the painting in one sitting, I knew it would work to my advantage if it sat overnight. When I return, I'll have a fresh eye so I can perhaps see something I've missed during these initial stages of painting.
Stay tuned!